Digital Guest Information and Visitor Guidance in the Bay of Lübeck

Digital Guest Information and Visitor Guidance in the Bay of Lübeck

The Bay of Lübeck Guide.

Where can I find everything about my holiday region from a single source, ideally supplemented by real-time information? What can I experience and explore in my area? When are the next events taking place that suit me? In 2018, we set out with these common questions from locals and guests, to provide the high-quality service our tourist information offices offer – digitally and as simply as possible.

In 2019, this has resulted in the “Bay of Lübeck Guide” – our digital holiday companion on site. 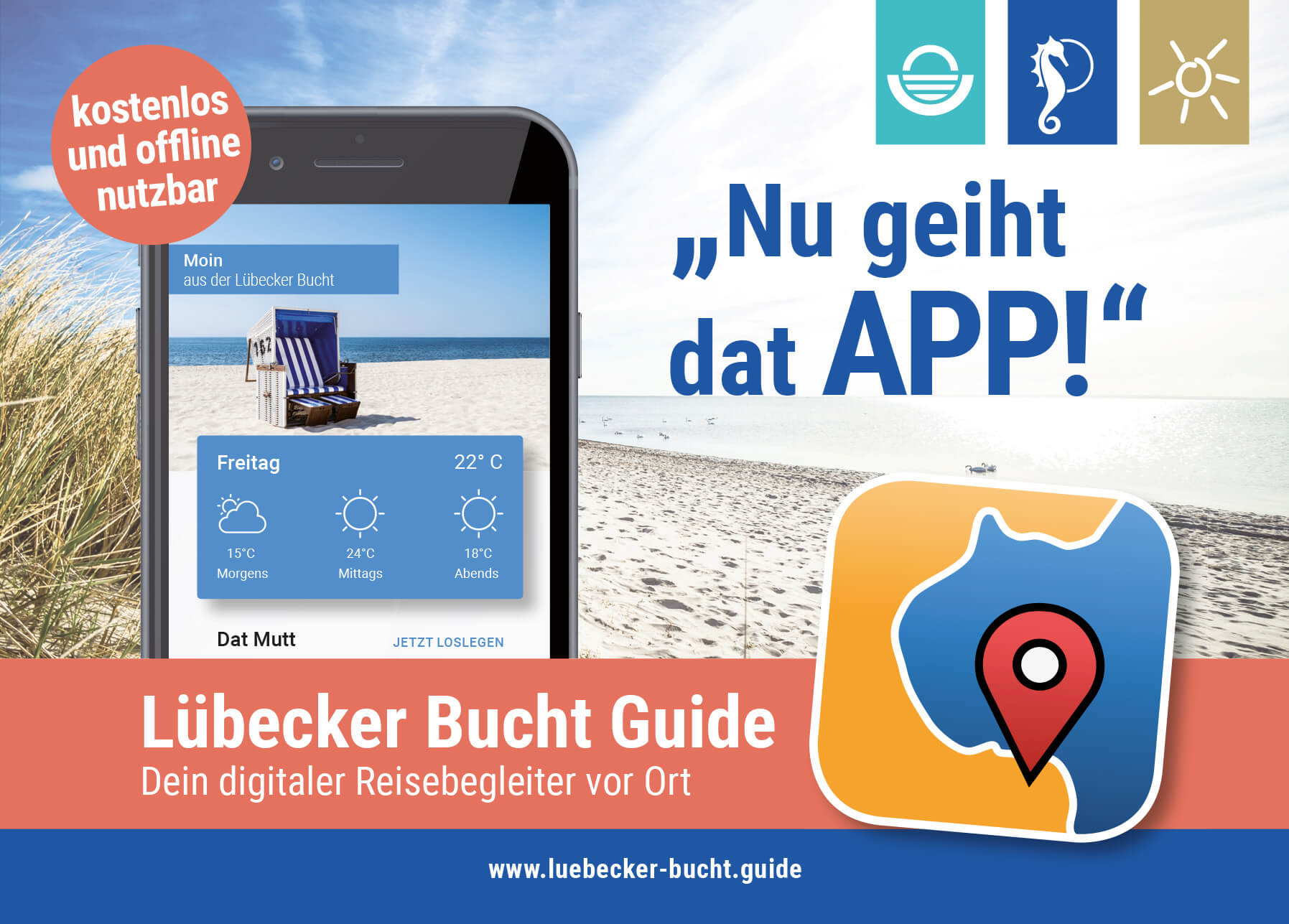 The offer is oriented towards the needs of the local people in form of compact holiday know-how, with which the coming days can optimally be arranged. The main functions of the Bay of Lübeck Guide are therefore direct access to points of interest (as of February 2021: > 1,600 POI’s) in the proximity (distance-dependent based on the user’s location determined by GPS), the events calendar, an interactive map, cycling and hiking tours, as well as a watch list with which all elements can be saved according to one’s own wishes.

The entire development was consistently carried out through eye’s of the guests and puts everything else aside that is perceived as disturbing, such as striking advertising spaces. The intuitive user guidance and the reduction to the basics pays off in terms of “user experience” and is usually – as in the case of the Bay of Lübeck Guide – rewarded by a high level of acceptance.

A low entry barrier is as important, which is achieved by implementing it as a “Progressive Web App” (PWA). This is an approach that has been pushed hard by major tech companies, including Google, over the past three years or so, and is being handled as the successor to native apps.

The advantage: By calling up a usual URL in any browser, the user ends up at something that looks like an app and can be operated with the familiar operating patterns. It just eliminates the “detour” of going to the app store, searching for the right app, and installing it. At the same time, the PWA offers all the advantages in development that were previously reserved for its native predecessor.

First and foremost, access to the hardware of the user’s smartphone, such as GPS sensor – which makes the aforementioned precise, distance-dependent listing of POIs in the Bay of Lübeck Guide possible.

The design of the interface with its functionalities is one thing, the other is naturally the information sourcing. In terms of content, the system currently covers a good 50 km of coastline along the Bay of Lübeck and several square kilometres inland. The connection of further areas in the course of the 2021 season has already been implemented. In figures, this means 17 Baltic Sea resorts in seven municipalities managed by five municipal tourism organisations – each with its own unique features and numerous different content management systems (CMS). This cooperation alone is an unprecedented success and guarantees an information density that no existing product in print can match.

The guest is presented with a coherent experience as an external image. Therefore, the content should be visually and tonally consistent, with zero latency in loading time since this comes naturally for the user.

The solution: A newly programmed “middleware” between the APIs of the individual CMSs of the locations, various third-party suppliers (e.g. windfinder.com) and the PWA. The system collects all necessary data, unifies them (“matching”), adjusts the cache for the also available offline functionality and the failover of a data source and returns them as bundled information for output to the Bay of Lübeck Guide.

For reasons of time and out of consideration for the structures that have grown over the years, the handling has not yet been adapted further, but it has been ensured that the participating locations can continue to enter their data as usual and that the uniform set of rules for all content managers is minimal. For example, there are now comprehensive mechanisms in the background for reconciling data, which must also be readjusted in the middleware whenever changes are made to the source. The effects of individualisation in the CMS world on the “Bay of Lübeck Guide” must therefore always be considered in advance.

In the long term, the aim is to simplify matching by standardising the content management systems directly in the locations. In addition, the introduction of common standards (e.g. a consistent vocabulary according to Schema.org) will contribute significantly to an increase in quality in the future, while at the same time streamlining the processes. 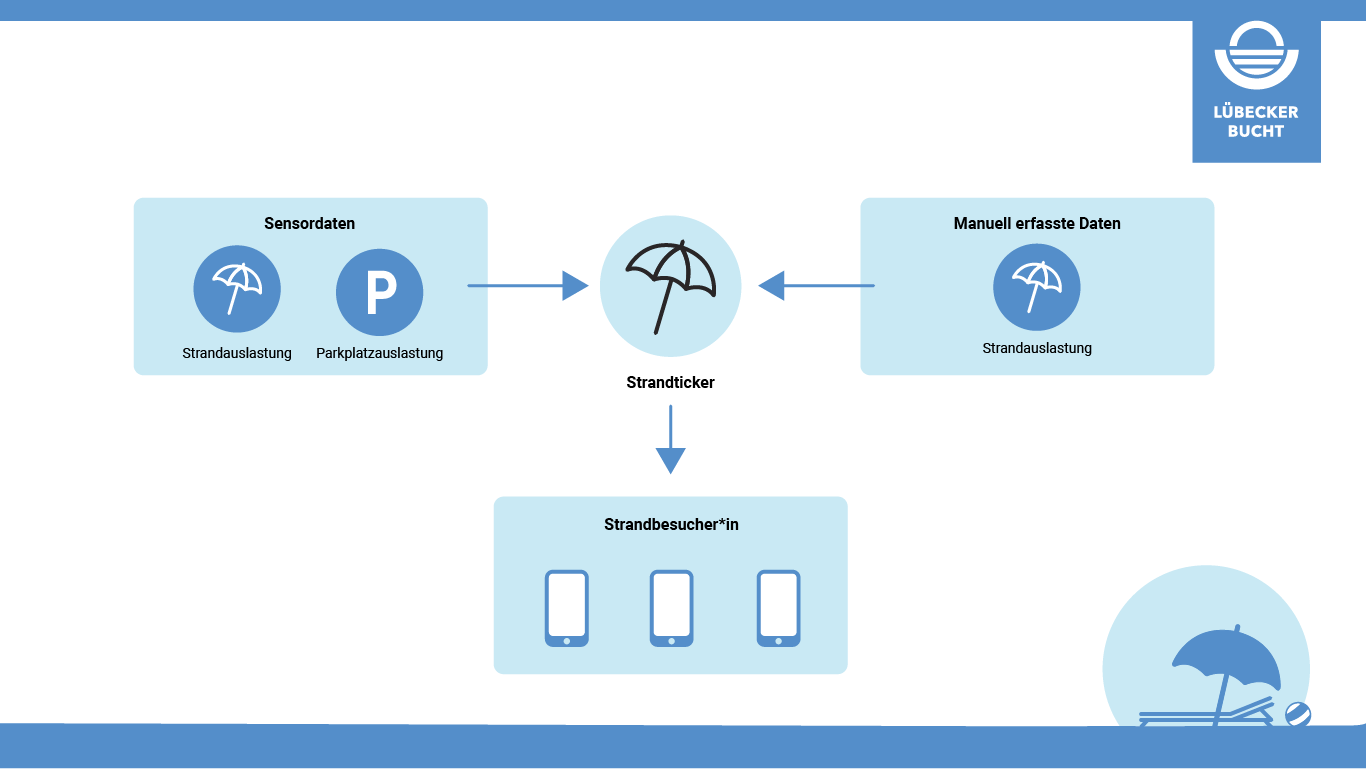 Looking forward, the middleware was programmed so that a future Open Data Knowledge Graph could replace the numerous individual interfaces.

In any case, the “Bay of Lübeck Guide” is more than the sum of its properties. As a custom solution “by tourism experts for tourism experts”, it has developed into a technology platform of its own due to its modular structure and the use of future-oriented technologies. From the very beginning, the focus was on long-term availability and maintainability of the product. This can only be achieved if there is a core component that is as minimalistic as possible, a central control unit, so to speak, around which self-sufficient extensions are programmed. If an individual element is no longer needed at a later date, it can easily be detached again thanks to the central connectivity to the core and the low level cross-linkages. At the same time, new developments can also be connected easily via this path. Although this increases the effort, since the data may have to take a slight detour, it is well worth it in terms of technical stability and consistent manageability for the programmers. Thereby, an ecosystem for future guest services has already been established that is widely accepted in this region. This means that individual solutions from different providers can be dispensed with. At best, these systems are integrated ‘under the surface’ and thus made accessible to the user within the familiar interface (“one-stop shop”).

A special spin-off of this possibility already existed: With the system known in 2020 as “Strandticker” or also “Strandampel”, a completely new type of service was created on the Bay of Lübeck. With the help of sensors – automatically, but also manually – day trippers, holidaymakers and locals were able to find out about the occupancy of the beaches and selectively also of the parking spaces in real time within the PWA for the first time. This is before they set off and also so that they can target a less busy section during their journey. 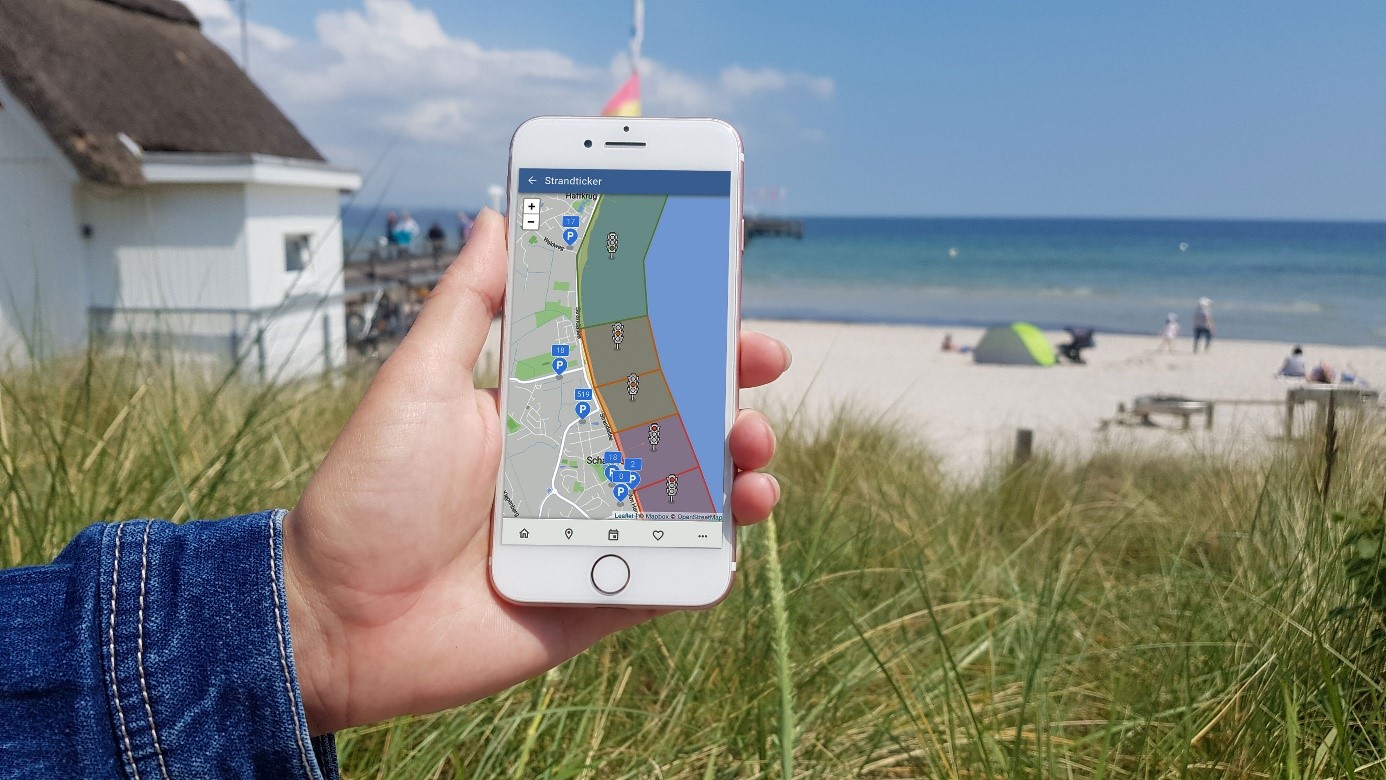 In the summer of 2020, which was dominated by the Corona pandemic, the beach ticker was thus able to make a significant contribution to providing people with information on how to observe distance and hygiene rules. The added value was quickly recognized and so from the launch of the system in July 2020 until October, around 410,000 “unique visitors” accessed the service and generated almost 4 million page views – mind you for a product that did not exist before.

This achievement did not remain hidden: In December 2020 the Bay of Lübeck Guide with its beach ticker was awarded twice together with a sister project from St. Peter-Ording and achieved 2nd place in the jury ranking, as well as the audience award of the “Deutscher Tourismuspreis 2020“.

Now the journey continues. In the coming time, it is planned, among other things, to enrich the existing real-time data stored in time series from the visitor frequency and parking sensors with additional values (weather, holidays, etc.) and thus arrive at forecasts and recommendations for the user. It would also be possible to play out content on the basis of individual preferences. Families traditionally look for child-friendly offerings, while couples often crave wellness and something a little more quiet. By means of AI, such tendencies could even be derived without the direct query of personal characteristics by the user.

If content apart from the beach is now increasingly added, a attention will gradually be drawn towards the inland, which is often less frequented compared to the coast. Holidaymakers could be directed towards offers a few kilometres away if the data suggests a high occupancy rate with day trippers. 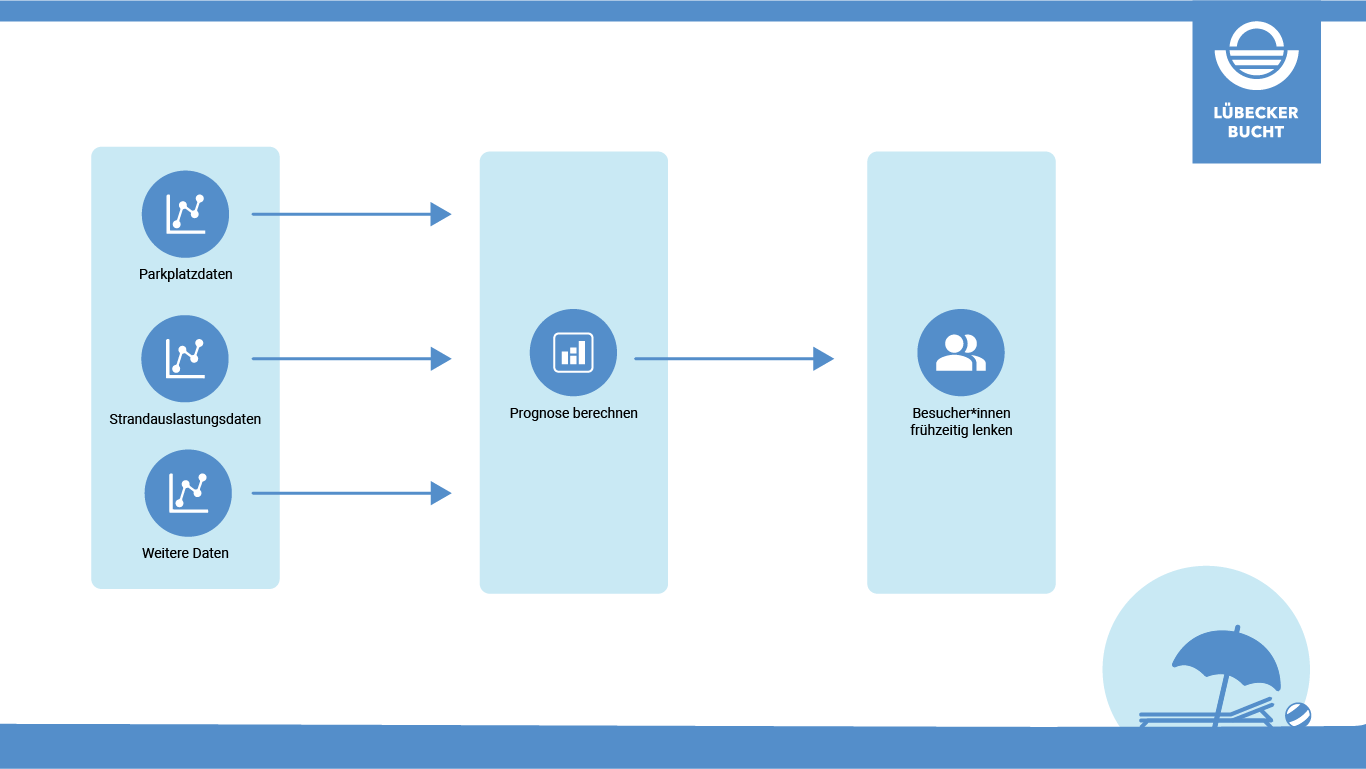 Thus, the qualitative and increasingly individual information of the guests in the Bay of Lübeck and beyond, as well as the accompanying guidance of visitor flows in our highly frequented destination has finally reached a strategic status. With further expansion of what we have achieved so far, we are convinced that we are on the right path to creating added value for everyone – residents, second home owners, holidaymakers and day trippers. 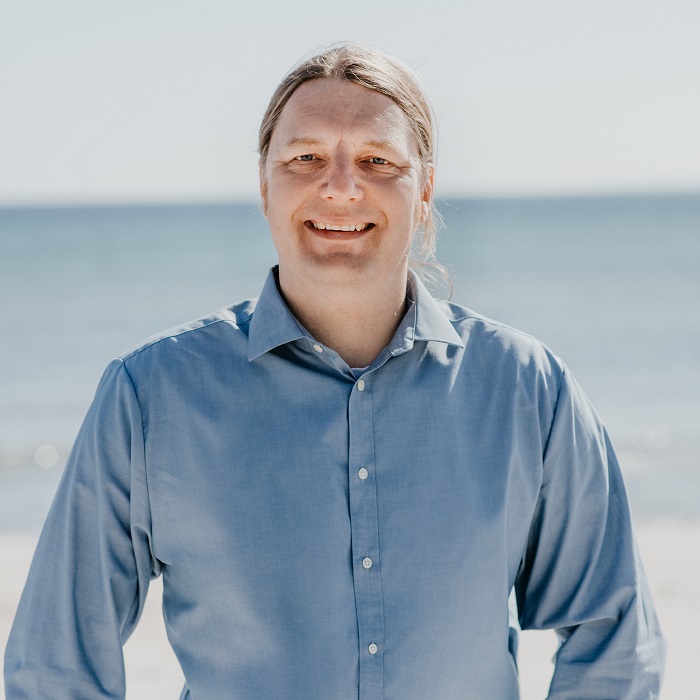 Paul Stellmacher is responsible for strategic tourism development in the area of digitalisation at TALB.

We will inform you directly about new contributions and news concerning the Open Data project of the German National Tourist Board.